This evening I make my final step up in my Imuran dosage.  After this evening I will be taking 125mg of a cytotoxic drug that is the “best case” scenario for treating my Crohns disease.

As my headaches increase in both frequency and severity – we are left wondering if it is still the medication causing me this trouble or if its something else.  Granted, I haven’t been to the optometrist for about… say… 10 years.  But it seems to be an awfully big coincidence that just after my Crohn’s is discovered and treated that my migraines go haywire.  With every passing day – we are more and more convinced that heminthic therapy is the way to move forward – there are some days that it seems like the only sane way.  On Saturday I got an excited call from my father who had come across an article on Hook Worms for the ethical treatment of autoimmune disorders.  I think it gave him a better understanding of what we hoped to achieve when we started talking about making me a Hook Worm farm.  The developer of the treatment, Jasper Lawrence, said in the article that he understands peoples apprehension buying a parasite from a guy over the internet with no degree.  I think he must be talking to the wrong people if he thinks that is the reception he will get.  He went on to say that only the desperate approach him.  I would like to go out on a limb and speak for every Crohn’s sufferer when I say that every single one of us is desperate to find a way to treat this disease which doesn’t involve poisoning ourselves with Prednisone or Azathioprine.  I am still desperately trying to get in contact with him – to find out costs if nothing less.  The article on the weekend revealed he was on the run from possible federal charges waiting for him in America.  I don’t give a dick about what the FDA say.  They are funded by the big drug companies who stand to lose billions with the introduction of a natural defense against autoimmune disorders.  I suppose I am lucky in Australia – we are somewhat progressively trialing Hook Worms as a treatment for Coeliacs disease, saying that, even if the results are positive, they still estimate that it will be between 20-30 years before the treatment is readily available.  It is going to be of no help to me then – considering with each passing birthday the treatment becomes less and less effective and therefore less viable.  If something is going to happen for me, it needs to happen soon.

The article in Q-weekend went on to mention the two doctors running the coelicas trial were themselves are hosting colones of hook worms to guarantee supply for the current and future trials.  Thanks to the internet – I have been able to find a physical address for one of them.  Over the next few weeks I intend to write a letter to him detailing my condition and include all the test results I can access in hopes that I will be considered for a Crohns trial… or perhaps in hopes he takes pity on my situation and provides me with a 5 year dose.  Are either of those circumstances likely – not really but as with most of my Crohns journey I have to feel like I am “doing” something… yes I am one of those people.

Apart from headaches and hook worms what else has been going on?  Quite a bit actually.  I had a pretty amazing birthday – I got a lot of heartfelt messages and calls as well as some amazing gifts which a few people put their whole heart into.  To top it off – I actually woke up that morning with a bit more energy than recent weeks.  Its a hard concept to get my head around – it was my first birthday with Crohn’s disease – but I have had it for about 20 years.  Knowing about a disease changes lives and it also changes perceptions of ordinary events…. I keep saying “before I was sick” but that was so far in the past I can’t remember all the details… I need to start saying “before I was diagnosed”.  I like to try to forget how dark it was when I was sick and didn’t know what was causing it.  I like to think I was better off then – ignorance may be bliss, but its not whats good for you.

I spent my birthday vouchers buying new work clothes – even after I promised myself I wouldn’t.  I did it for a few reasons.  Firstly, this is their last excuse, their last reason for not giving me a promotion.  If I am still here at review time next year and there is no mention of promotion or pay rise, that will seal the deal.  They can’t just keep moving the goal posts whenever I get close.  If they don’t want a female manager – they need to just say that so I can move on.  Secondly… well I kept my big shirts on to hide signs of the disease to make everyone feel more comfortable about me being here.  Well I am not comfortable here at the moment… and I figure if I have to be confronted with my disease day in day out – then everyone else needs a dose of reality as well.  So now my badly eczema scared arms are clearly visible and my seesawing weight can be seen…. I don’t think this will achieve anything… but the reality is this is what they wanted… they are now confronted with the disease a lot more than they were before – I have been wondering to myself how they are going to react to it being so in their face?

A few last things – I have entered an art competition for a local pizza chain – I have posted one of my entries below.  All my weird and wonderful artwork is available on my facebook page www.facebook.com/enslaveddesign – swing over and have a look if you have a facebook page and like it if you like it.  And lastly – thanks to  Carly who writes My Stupid Crohns for adding me to her blogroll – it was a great surprise.  I am so glad that other people with Crohns and Ulcerative Colitis are breaking the silence and talking about conditions that carry the stigma that they shouldn’t be talked about…. 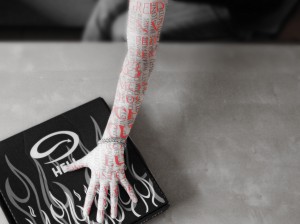 My Life In Pictures

Raise you glasses to the best birthday surprise on

Beautiful photo on the cover of the January issue

My precious. You never get old. #singapore #marin