You know how when your too close to a situation – it’s almost impossible to see the full extent of what’s going on? I think I’ve been in one of those situations for going on 15 years.

To fill in some blanks: PLOT TWIST. I quit my job of almost 15 years (which I have referred to as FTJ throughout my story) to take a new position which I thought was perfect – I was wrong, lots of bad things happened and I quit inside two weeks. Turns out it’s the second smartest thing I’ve ever done considering that workplace has been through 4 other staff in that 10 week period. Was I naive, yeah sure. Did it all work out – better than I ever could have hoped. I started my new job on October the 4th (after doing something monumentally irresponsible and running away from home for a week). And it’s only now I’m on the other side that I realise that emotional and mental abuse can be loaded onto ANYONE, regardless of how ‘tough’ they think they are… and it’s absolutely not limited to a ‘relationship’.

For most of my 14 years of employment – I was in an abusive relationship. I was bullied by other staff members on an almost daily basis. I was drastically underpaid. And I was forced to do things that would have been unreasonable for a healthy, male employee – like pack two tonne pallets on my own. Every day I walked into that place – I was called names. Told I was stupid or just plain wrong. I had my ideas stolen. I had my work stolen. I was forced into several other jobs because others “didn’t wan’t to do them”. A lot of stuff landed in my lap. I worked thousands of hours of overtime during my employment with FTJ – and I saw only an hour here and an hour there in return – each time I was made to feel guilty and like a burden.

I was called a “dumb c**t” every other day by one particular staff member – nothing was ever done, even when I brought it to the attention of my superior and even his superior when he did nothing. I was told it was “playful banter” and that I needed to accept that that’s how the workplace ran. Well, if any of you ever read this, let me break it down for you guys. Your workplace runs on mistreatment, abuse and expectation. You have an absolutely toxic environment and I didn’t realise just how bad it was until I was employed by someone else.

I had to sit there and listen to another staff member say I should be fired because I was chronically ill – that I didn’t deserve redundancy because I was just a dumb chick who didn’t do any work. I listened to it over and over and over again – and like any other abuse victim, I started believing it.

I’m here to say – regardless of what laws are in place – workplace mistreatment is still going on – and it’s vile in male dominated industries. We are so scared we’ll be unemployed that we say nothing. We just take it… until one day we don’t.

Back in May I wrote about having no respect for myself – and that was so true… too true. It was at that point I looked around and got out – sure my first step wasn’t perfect, but leaving FTJ was the best decision I’ve ever made. 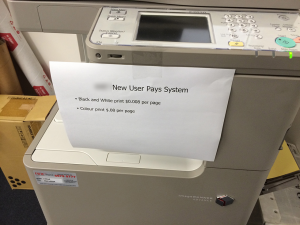 … one of the regular motivational signs left for me to find…

I took a new role in September, starting October. It is warehouse based again – so I had a lot of anxiety to start with. It was needless. I have not been called a single name… people say “good morning”, staff use “please” and “thank you”…. you’re told you’re doing good work. I’ve been treated so badly for so long – every time I’m complemented, I have to run away. My new boss has said “one day – you’re going to tell me what they did to you”. I doubt she would believe it if I did. I’m not sure if I even believe it was all allowed to go on now I’m on the other side. I look back at it and think “surely, I can’t be remembering that correctly”, but I am. I saw the very worst side of human nature there – the need to bitch and harass, to tease and torment. And I saw managers that thought it was ‘ok’ to let it happen.

Today – I haven’t taken an anti-anxiety pill in 6 weeks. I’m starting to come out of my shell again – and feel normal. Well, I’m just starting to ‘feel’ again, full stop. I have been told I’m cleaver… and valued… and tough but kind. I’ve been thanked and smiled at. Don’t get me wrong – it’s going to take a long time to undo the years of workplace abuse I went through – but I’m confident now it will happen – and I can’t express how happy I am. I’m not sure there are words to describe where I’ve found myself. I get into work early – because I love it… and I love the people… and I WANT to be the best… I WANT to make them the best. I wear makeup again. I bought new work clothes. I have started to paint my nails and I’ve even made an appointment at the hairdresser. The amount of money I earn doesn’t seem important anymore – even though it’s drastically more than FTJ ever considered offering me.  The stories I tell about work are happy and funny… I don’t come home crying… I don’t wish for hospital time…

My whole world has changed. And I can’t express how thankful I am. I am so thankful for this new opportunity that’s not only changing my life… but it’s changing my health. I was tragically sick back in May – my liver was in distress, my Crohn’s was flaring – I was very sick and on the verge of being put on strong biological drugs… it’s amazing to see how much of that was actually stress.

My liver is better and almost back into the “normal” category, my symptoms are there but far better than before. I have only had one incident of having to stop at a service station on the way to work in the last 7 weeks… even my absorption rate is better. How do I put this into words? How do I thank these people for potentially changing my life and saving my career… I can’t really – because they don’t know I’m chronically ill – and the fact I’ve not had to tell them is testament to how much better I am.

Managers: your staff are still people. If you want to get the best out of them – how about stopping the screaming, abuse and threatening? Understand that workplace bullying is a REAL problem and can start having a physical, outward impact on even healthy people – so how about you fire the people who think it’s ok to go around being needlessly cruel and call it “workplace banter”. Instead of disgusting mind games to keep your employees – how about trying something revolutionary like using your manners, handing out praise for little things and maybe rewarding good workers with pay rises so they don’t look elsewhere? Just a thought.

Employees: Being told you are stupid or not good enough is not ok. If you are still employed by the company – then obviously you are what they need. If you are chewing down anti-anxiety pills to make it through a day of work – have a good long hard look in the mirror. You ARE enough – they are just telling you your not to manipulate you into not leaving. You WILL get another job. Take back your self respect by taking a chance on yourself. There are good people out there who value the people they surround themselves with.

I know – because I’ve found some.