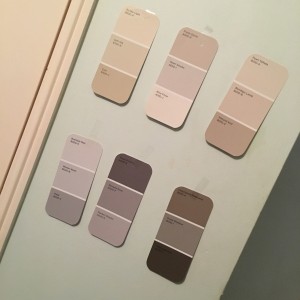 Where have I been for the last few weeks…. Trying to swallow the huge mouthful I decided to bite off on behalf of both Stocker and I.

Last year – we made a decision that has heavily impacted our well being. We decided that we no longer wanted to live where we are. I’m not talking about the house, or even the suburb. I’m talking country. Don’t get me wrong, Australia has been more than good to me – I appreciate everything I have because I was born here. I also know now, without a shadow of a doubt, that I don’t belong here.

It’s a strange feeling – like I’m constantly out of place. I mean, I know I’m strange – duh. But this is something different it’s like… how do I put it… I’m faking it?  I don’t know if anyone will understand that sentiment. I don’t know if it really worries me that it’s misunderstood.

I was offered (another) in a long line of job opportunities last year – my 4th job offer in 2015. It was here on the Gold Coast – in Southport in fact. The money was good – I wasn’t particularly interested in the subject matter – but, so? When the offer came in – I brought it home and we talked about it. It was a long talk. All the things that were making us unhappy (and in my case sick) came up. The top of the list of course was our jobs – but there was much more than that. And that’s when it really hit home… a new job would only make an impact on one point out of many. The reality is – we’d still be just as unhappy – we’d just have slightly more money (but no annual leave). The outcome of the conversation was, we needed to change EVERYTHING. We’ve always wanted to move to New Zealand but because we’re so unhappy – we’ve holidayed often. It’s depleted our savings to the point that a few of the important things that needed to happen to our house to make it tenantable – hadn’t happened. 2015 was no different – we’d already booked a rather long jaunt to Canada over the Christmas period.

After realising it wasn’t “any one thing”, it was “everything” – we made a new list. A list that would eventually get us out.

The next day – I reluctantly knocked back the job for the purposes of maintaining my very long work history (which is very attractive to lenders) and my sick leave (because fixing my now active WPW was pretty high on the list of things we needed to do). Have I regretted it? Only about 1,000 times. But we’re in the thick of it now… and every little step, regardless of how painful, is a step closer to where we need to be. 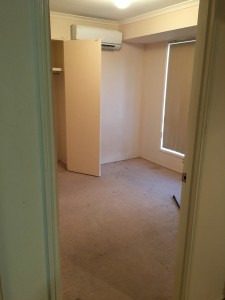 The long weekend just past, we were to tackle the next phase in our plan… we thought it was a relatively small step until we started.  We intended to paint our bedrooms AND bathrooms ahead of new flooring going down on Tuesday the 29th of March. So – you know when you look at something and just don’t see the flaws? Turns out we’ve been doing that pretty much for 6 years. NOTHING in that house had been done properly until we started renovating it…. the patio, retaining wall, painting, kitchen… you name it, it was slapped together in a hurry and now we’re paying the price for being excited first home owners without a clue in the world.

What started as just “painting the walls a nice neutral colour with a decent paint” has ended up “fuck it – looks like we have to do the whole thing”. Why? Because NOTHING is colour matched… and because we weren’t looking closely at it we didn’t notice that the walls didn’t match in places, the cornice was a different colour white to the ceiling and all of the doors were in different stages of colour degradation spanning from a slightly off white to a full cream. Naturally – we didn’t get everything done. The bathrooms remain untouched, we have no doors in the house and now we need to replace the blinds that literally fell apart in Stockers hands as he was taking them off the windows….. I’ve had to laugh about it… seriously. If I didn’t I’d be crying.

My office space is currently our dinning table – right next to my rather narky and tired uni student – I can’t work with him moaning and grunting at his next task or reading materials.

What we’ve done looks really good – I don’t want to take away from that… but every little thing has taken quadruple the time we estimated… at this rate we’re going to be sleeping in our living room until May…. not really ideal….

This is the “baptism of fire” we never had because we were too busy running all over several continents – and it does absolutely serve us right…. It does. I said to Stocker yesterday “this is the year of shit – after this we’re in the clear”, he reminded, “last year was the year of shit – or don’t you remember the $20,000 retaining wall and fence”. I do, Oh I remember. I suppose then, this is the year of diareah. Next we move into the bathrooms which need only (I type only an laugh a little in my own head) new paint, a few new fixtures and some electrical work done… after that… it’s the subject we’ve both been dreading – the kitchen. We have a choice to replace the water damage and re-laminate the existing cabinetry or rip it out and start again. It feels pharisaical saying it considering the new kitchen is 4 times the price of just fixing up the old one, but starting from scratch is a better and (in the long run) cheaper option. Lots of things work “differently” in Queensland – adhesive is one of those things…. covering the cabinets again may last 3 years with tenants rough handling…. this is the smarter move…. 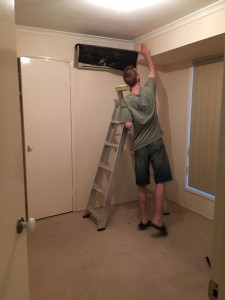 After that… it’s just some maintenance really – some gardening, cleaning and maintaining our solar panels…. getting our air conditioners serviced… I still reserve hopes of going away at the close of this year….. but with the kitchen coming in at a tidy sum of $12k…. those hopes have been moving toward a more realistic goal of having a weekend on Morten Island. Of course next year will be different with holidays already planned to Asia and Europe… but man, I just got a new passport… I’d really like to be giving it more of a workout….

While I know we are lucky to have our own home – and be thinking about the next one. When people tell me how lucky I am right now, while I’m kinda sleeping in my lounge sucking down paint fumes – it’s really hard to hide the eye-roll.

Onward and upward. I’m trying to restrain my enthusiasm for painting our architraves and skirting boards this weekend… again I’m allocating 2 days so I guess I’ll see you in 4 weeks.